The Gates are Closing
On Yom Kippur, ten characters in synagogue, grappling with identity, meaning, repentance, forgiveness...
Across the Jordan
A contemporary Israeli-Palestinian conflict plays out against the backdrop of mythic Biblical rivalries.

Finding Words
A new book of poetry with an old soul, a stunning cartography of the heart.

Memoir in poetry and prose

The Gates are Closing

Merle Feld’s award-winning play The Gates Are Closing is available for congregational or campus use as a Selichot/High Holiday program. The action takes place in a synagogue on Yom Kippur, following 10 main characters who span a wide range of ages, backgrounds, and professions as they grapple with issues of identity, meaning, loyalty, betrayal, repentance, and forgiveness.

The play has generally been presented as a reading with congregants taking the parts. It requires minimal preparation time and has proved a highly successful interactive program yielding a larger-than-usual turnout for Selichot. Hundreds of colleagues have used The Gates are Closing and have assessed it to be a powerful and moving experience, a highly effective program as the congregation enters the High Holiday season. For more information about presentation, sample press release, post-reading discussion guide, and costs for rights to the play and a script, email merlefeld@gmail.com.


Praise for The Gates are Closing

"I have studied with Merle for years through her Rabbinic Writing Institute, and I can easily say there are few other people who have taught me as much about what spirituality means, how to listen to another person, and how to listen to yourself.
But while I had already grown to know and love Merle as a teacher and through her poetry, I learned last year what a wonderful congregational educator she is when I decided to use her play, The Gates Are Closing, as part of my congregation's Slichot observance. Because the play is so well-written and because Merle herself is accessible for any questions, there wasn't much I had to do as the rabbi…. The play, which was performed in full before Slichot services, and in excerpted portions during adult ed workshops on Yom Kippur afternoon, was some of the most meaningful spiritual preparation for the High Holy Days that my congregation has experienced. I received only compliments from my congregants, who resonated with many of the themes raised by the play, were grateful to hear so many of their own feelings validated through the diverse cast of characters, and entered Yom Kippur with a broader sense of how to open their hearts before God…"
--Rabbi Beth Kalisch, Stephen Wise Free Synagogue, NY


"...Saturday night at 6, one local congregation will invite the whole community to learn how the High Holidays feel -- and what a time of reflection can do. Congregation Beth Israel will begin the High Holiday season with a staged reading of Merle Feld’s play,The Gates are Closing... Feld tells the stories of 10 people meeting to pray on Yom Kippur and facing themselves. It is a play full of tough and liberating honesty. Feld has hold of a vital feeling too few people try to invoke: the feeling of telling something you have carried alone. The weight lifts, and you are sad and tired and released and reminded that things can make sense again, as Feld says. And you are left with the rebuilding.
'So long as Adam [in the Garden of Eden having eaten the forbidden fruit] pretends that hiding is possible, he cannot begin to find his way,' Feld’s Rabbi tells his people. 'God asks ‘where are you?’ to awaken Adam, to bring him out of hiding. Today is the day for you and me ... to come out of hiding.'"
--Kate Abbott, The Berkshire Eagle September 2012


"We offered the reading last night to high acclaim. The readers especially felt the impact of the themes. And the discussion following the reading was lively, compelling, and illuminating. The issues you raise are so real for most of us – unresolved issues with those in our present and in our past – including God, a desire to make ritual more meaningful but perhaps lacking the tools to do so, the brutal honesty of really being able to forgive, and the underlying preoccupation with a reach for closeness – with God, with each other, and with ourselves. I cannot imagine a more meaningful, real preparation for the High Holidays than performing your play. Thank you so much for sharing it with us."
--Rabbi Michael Whitman, The Adath, Hampstead, Quebec


”We had no idea how the reading would be accepted. But for an hour and a half there was standing room only, and other than the voices reading, only the sound of hearts pounding. We had no lighting, only one microphone, no Equity actors. We might have had a ninety minute bomb on our hands. It was hardly a bomb, but it was explosive. The drama involved the congregation in the religious process in a way that the rote-reading of the service cannot even begin to approach. Each Yom Kippur [this congregation did the reading on Slichot and then again on Yom Kippur afternoon] we engage ourselves on as deep a level as possible. What we attained this year with The Gates are Closing will be difficult to surpass.”
--Mike Berezin, Havurah of South Florida


Merle, I wanted to let you know that we put on The Gates are Closing last night and that it was extremely well received. It was a moving experience both for the actors and for those in attendance, with one attendee commenting that the play broke her open to allow the message of the Holidays to enter her heart. I’m very happy we brought the play to our community and thank you for your support as we prepared.
With best wishes for a Shanah Tovah uMetukah,
--Rabbi Joshua Waxman, Fort Washington, PA


"We used Merle's play The Gates are Closing as a Selichot program at our synagogue. It was very affecting, both for the performers and for the audience, and it stimulated valuable discussion about the process and content of repentance. We highly recommend Merle's work!"
--Rabbi Adam Zeff, Germantown, PA


"Once Shavuot comes, I begin to start considering the Yamim Noraim, and I wanted to suggest a great Selichot program we did at my shul last year: Merle Feld's play, The Gates are Closing. The script travels with ten characters as they powerfully and personally experience the 25 hours of Yom Kippur, as the day's themes and events inspire memories and soul searching in each of them. We had 10 congregants -- from teens through seniors -- cast as the various characters, and the effect was deep. It clearly affected and inspired folk -- both the actors and the much larger Selichot crowd (everyone's friends came to watch them perform!) present. The conversation following the reading was short, but also very moving (I would time it for more post-show discussion were I to do this again). The actors themselves talked about how they couldn't do more than one read-through at any rehearsal from being so emotionally drained. A number of other folk also found me in the days following to comment about how much time they spent thinking about the characters and themes after the show. It truly got my community started with the Yamim Noraim in a moving way."
--Rabbi Michelle Fisher, Walnut Creek, CA


"My job as a rabbi is to encourage and enable people to grow spiritually, and the texts and practices of our tradition are my tools. It is an irony that the largest "audience" is drawn to what may be the most difficult of those practices to understand and internalize: the High Holidays. One of the most effective High Holidays events I have arranged for my congregants was a staged reading of Merle Feld's play The Gates are Closing. With a talented director (a congregant) and a cast of volunteers from the congregation, and with only two full read-through rehearsals between Rosh Hashana and Yom Kippur, our troupe [presented the play] as a prelude to minha and ne'ilah on Yom Kippur. Now refracted through the lives and problems of the play's characters, the discourse of repentance, reconciliation, and forgiveness suddenly took on personal meanings. Our own longings and hurts, our own hopes and fears, were seen and felt through their lives. Our experience of Yom Kippur was deepened…"
--Rabbi Peretz Rodman, Kehillat Beijing, China


”Last year for Selichot, members of the congregation did a reading of Merle Feld's play The Gates are Closing. A drama of great religious insight and nuance, Feld introduces us to a minyan of Jews on erev Yontif, from the assimilated to the rebbetzin, from a teenager to an Israeli yored, and explores their meshuggas, dreams and yearnings. By the play's end we realize we have been introduced to dimensions not only of our community but of ourselves. [The play reading] instigated probably the most thoughtfully lively High Holyday preparation we've ever had. The preparation involved a few rehearsals...the impact on all of us lasted well through Yom Kippur.”
--Rabbi Lawrence Kushner


”The play is highly evocative, astute and powerful as it weaves the familiar themes of Yom Kippur through the lives of rich and engaging characters in surprising and poignant ways. The play's end (heralded by the sound of a shofar) left our congregation breathless before we began an illuminating dialogue with Merle. In my experience, it was one of the most effective preparations for Slichot - both for the audience and the players...something quite wonderful on Saturday night as an inspirational introduction to the Slichot service itself.”
--Rabbi Justin S. David, Northampton MA


"As a congregational rabbi, I directed a reading of Merle Feld's The Gates are Closing for our Selichot programming one year. The interwoven stories of the play touched so many people and was a precious gift to the community. Those who acted in the reading along with all those who attended it found a character, a circumstance, or a story to which they connected and that opened their hearts to the process of Teshuvah (atonement). Like the sound of the shofar, it's a wonderful way for a community to awaken itself to the meaning of the Days of Awe."
--Rabbi David Dunn Bauer, San Francisco, CA


Merle,
I wish you could have been with us. The actors were truly amazing, every one of them. The audience was bowled over at the end, unable to say anything more than Wow… Thank you so much for offering this to us. Personally, it was a powerful window into people's souls during those long hours of prayer. You have so much insight into the human heart.
--Rabbi Barbara Penzner, Boston, MA 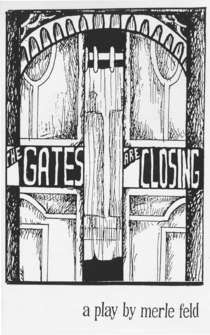